The Allen Institute for Brain Science builds data-driven classifications of cell types in the mammalian brain. The resources and publications below provide tools and knowledge to explore the organization of cellular and molecular complexity in this amazing biological system.

We seek input from the community as we continue to develop applications and paradigms to classify cells, and encourage you to contact us through the Allen Community Forum. 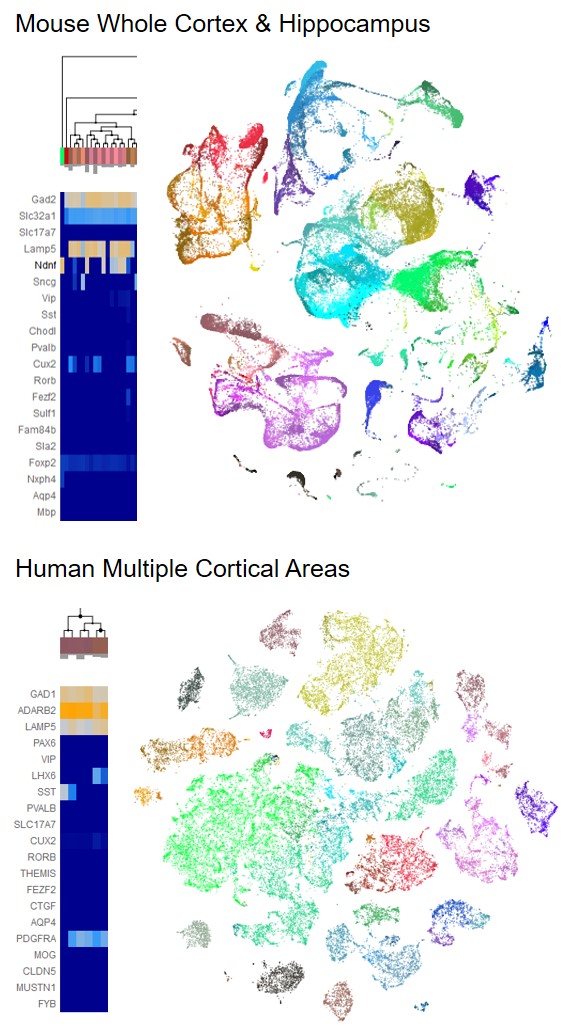 Transcriptional taxonomy of the human and mouse forebrain

The Transcriptomics Explorer is a tool for visualization and analysis of large-scale single-cell or single nucleus RNA-Seq data and associated cell type annotation. This tool will have periodic feature and data content updates.  Currently, four taxonomies are available for exploration:

Gene-level (exon and intron) read counts and metadata for all samples is available at http://celltypes.brain-map.org/rnaseq/. 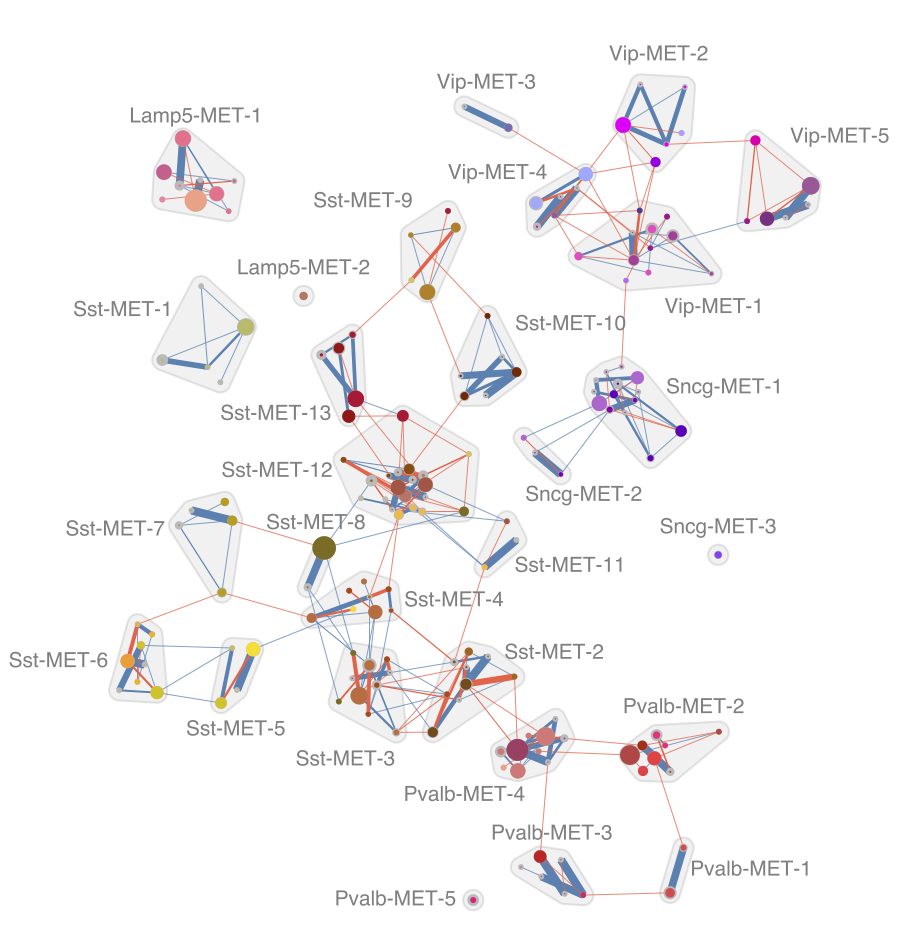 The number of estimated transcriptomic and morpho-electrical cell types in mouse visual cortex differ by at least a factor of two. To explore the basis for this difference we carried out experiments to capture transcriptomic, electrophysiological, and morphological characteristics of single neurons using a modified Patch-seq recording technique. We also applied this Patch-seq approach to characterize the multimodal features of human cortical neurons for the purpose of cross-species comparison and to delineate shared and distinctive features relative to mouse cortical neurons.

Methodological details and background information, as well as access to multimodal data (and metadata) from 4,435 mouse and 318 human cortical neurons, are currently available. Additional data, metadata, and a data browser will be released soon. 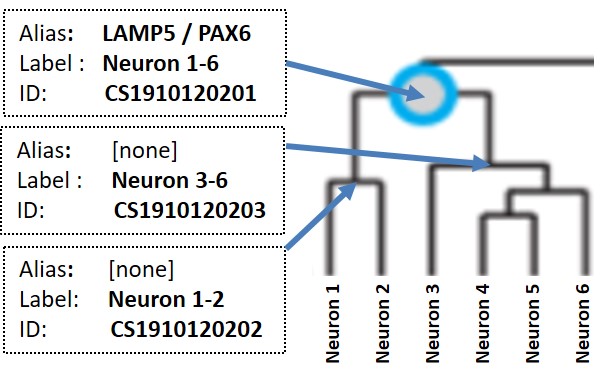 Single cell RNA sequencing (scRNA-Seq) technology has led to an exciting expansion of datasets, tools and approaches for identifying and classifying cell types. We present the Common Cell Type Nomenclature (CCN), a working framework for creating brain cell type nomenclature, and include examples using published datasets. Feedback on the CCN is encouraged on the Allen Community Forum.  An updated, detailed description of the CCN is available in a publication by Miller, et al. (2020), in eLife. 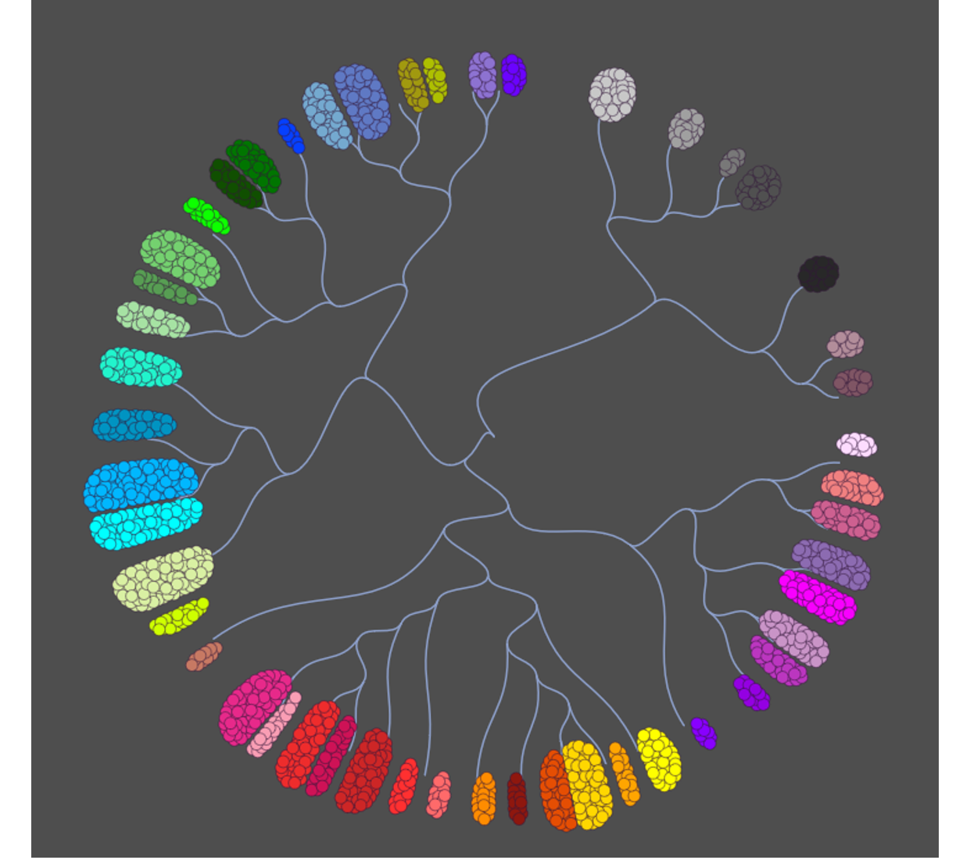 The mammalian brain is composed of various cell populations that differ based on their molecular, morphological, electrophysiological and functional characteristics. Classifying these cells into types is one of the essential approaches to defining the diversity of brain’s building blocks.

An interactive cellular taxonomy visualization representing diversity in the mouse primary visual cortex allows you to browse this landscape, based on gene expression at the single cell level, using data from over 1,600 cells. This visualization will guide you through some of the data and insights from this study. 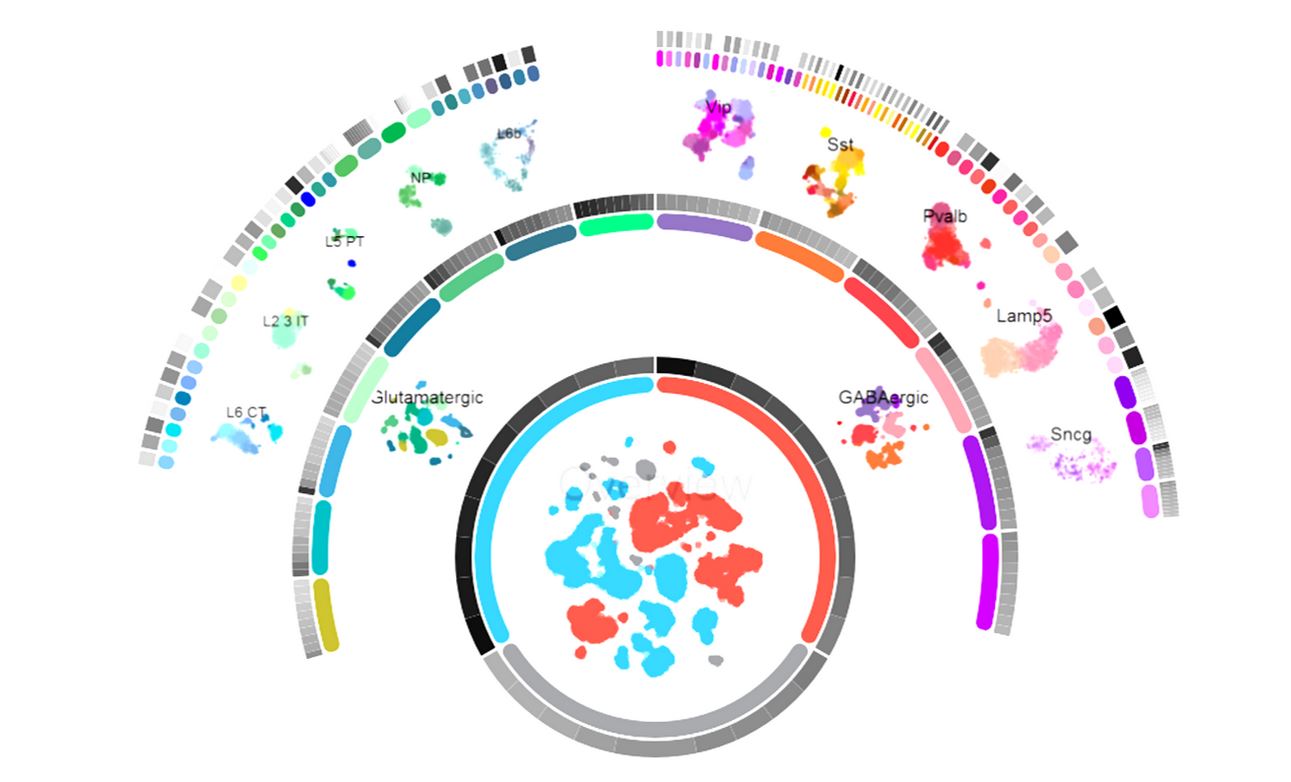 Cytosplore Viewer is a downloadable application that allows exploration of single cell RNA-Seq data from the Allen Cell Types Database and from associated Allen Institute and BICCN publications. Cytosplore Viewer includes sequencing data from over 49,000 nuclei collected from the human cortex and from nearly 75,000 cells collected from mouse cortex and hippocampus, and is back-compatible with previous cell type taxonomies of human MTG and mouse VISp/ALM. Cytosplore Comparison Viewer (new!) is tailored to cross-species comparison of cell types in the motor cortex between human, marmoset and mouse. Cytosplore was developed by a team from the Leiden Computational Biology Center, the Division of Image Processing at the Leiden University Medical Center, and the Computer Graphics and Visualization Group at the TU Delft in collaboration with the Allen Institute.

In addition to data navigation tools, researchers at the Allen Institute share data via published peer-reviewed articles and pre-review open access services, to provide insight into the data and analysis used to build taxonomies.  Selected studies are below.

To better constrain the definition of neuronal cell types, we characterized the transcriptomes and intrinsic physiological properties of over 3,700 GABAergic mouse visual cortical neurons and reconstructed the local morphologies of 350 of those neurons. The data support the presence of at least 20 interneuron types that have congruent morphological, electrophysiological, and transcriptomic properties.

This manuscript used two complementary single-cell RNA-sequencing approaches, SMART-seq and 10x, to profile ∼1.2 million cells covering all regions in the adult mouse isocortex and hippocampal formation and derived a hierarchical cell type taxonomy comprising 379 transcriptomic types. Data in this work is included in the Transcriptomics Explorer tool for mouse, described above.

To probe the functional and anatomical correlates of the diverse set of transcriptomic cell types described in human cortex, a robust Patch-seq platform using neurosurgically-resected human tissues was built. This manuscript characterizes the morphological and physiological properties of five transcriptomically defined glutamatergic neuron types in layers 2 and 3 of human cortex and compares these properties with matched neuron types in mouse.

To systematically profile morpho-electric properties of mammalian neurons, a single-cell characterization pipeline was built to generate data from patch-clamp recordings in brain slices, and biocytin-based neuronal reconstructions. This article presents the results of that study, with a taxonomy of morphologically and electrophysiologically defined cell types in the mouse cortex: 17 electrophysiological types, 38 morphological types and 46 morpho-electric types. Data from this publication can be explored in the Allen Cell Types Database.

A review of recent studies of cellular diversity in the human brain and immune system using single cell and single nucleus RNA-sequencing. Discussion of a method to identify cell type specific marker genes and a proposal for naming and representing cell types in a structured Cell Ontology.

This work presents a high resolution cellular taxonomy of two regions of mouse cortex using single cell RNA-sequencing. Data in this work is included in the RNA-Seq Data Navigator tool for mouse, described above.

This manuscript describes a cellular taxonomy of human cortex using single nucleus RNA-sequencing. Identification of matching cell types and cell classes between human and mouse is provided, and analysis of divergent expression between matching types. Data in this work is included in the RNA-Seq Data Navigator tool for human, described above.